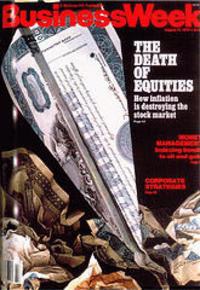 An Independent Financial Advisor’s Perspective on the Persistent, Rumored Death of the Stock Market

Legend has it, 19thcentury humorist Mark Twain once had to refute a rash of rumors swirling in the popular press about his alleged death.  “The report of my death was an exaggeration,” he wryly observed.

What about the stock market? How many times have popular pundits pronounced its demise? Clearly, all such predictions have been dead wrong so far.

One noteworthy example is a Business Week cover story that ran 40 years ago, on August 13, 1979.  Advisor and blogger Barry Ritholtz has reprinted this now-infamous article here, for historical reference.  Its authors bemoaned, “this ‘death of equity’ can no longer be seen as something a stock market rally—however strong—will check. It has persisted for more than 10 years…”

This independent financial advisor’s take:  This article, and plenty of others like it, are textbook examples of financial pornography. As Ritholtz observed in a separate piece, “One day, the world will indeed end.  The sun will run out of hydrogen fuel, turn into a red giant star, and expand until it engulfs the earth.  That is about 5 billion years in the future.  In the meantime, you can safely ignore all other forecasts.”

I couldn’t agree more, at least when it comes to market forecasts. There’s always something causing us to wonder whether the end is near.  A few years ago, it was Greece.  Now there’s trade wars.

These too shall pass, only to be replaced by new sources of return-dampening concern.  In the meantime, quietly, unexcitedly (and thus often without remark), the markets will almost certainly continue to inch upward over time.

Consider that 40 years is probably most people’s investment horizon.  So, as an exercise, this independent financial advisor pulled some returns from various indexes, in Canadian dollars.  Since Business Week pronounced the death of equities, here’s what actually happened:

For my money, I’m continuing to bet that our stock markets will remain alive and well for another 40 years, and then some.  Unless the sun actually does explode, in which case, I stand corrected.

Q&A: What is behavioural finance: And what’s it to me?

The timely and timeless roles of fixed income investing

The role of DFA Funds in client portfolios